However, there aren’t that many situations where animals, especially wild ones, have helped humans in need. That’s why these stories are special.

In 2005, a 12-year-old girl in Ethiopia was kidnapped on her way to school. She was taken by seven men, one of which tried to force her into marrying him. She had been abducted for more than a week during which time the men beat her and assaulted her until finally three lions came out of nowhere, chased the men away, and protected the little girl until rescuers came and saved her. Apparently, the lions could sense and differentiate the predators and the victims so they tried to isolate the victim from the predators.

Dolphins save surfer that had been bitten by a shark

Dolphins are the most popular human rescuers in the wild. In 2007, in California, Todd Endris had an unfortunate meeting with a great white shark in which he was badly injured and he couldn’t swim so his chances of survival were very low. Luckily he was saved by a group of dolphins that came and made a protective circle around him so they forced the shark to turn away and leave. Then they guided him and helped him get to the shore.

A seal saved a group of people from a white shark

In 2011, a British tourist in South Africa got badly wounded by a shark which made him lose a lot of blood. Two of his friends quickly jumped in the water to help him, but the shark was there and they couldn’t do much against it. Luckily, a seal came to rescue the humans by circling around them which confused the shark and made it to leave. The seal then stayed with the men until they were safe on the shore.

In 1969, Dudley Jones and his crew of two more people had an accident that sank their boat and he was the only survivor. He was very close to drowning but luckily a seal came to his help and helped him get to the shores safely.

A bear saved a man from a mountain lion attack

Robert Biggs from California had been watching a mother bear and her cubs when he was suddenly attacked by a mountain lion. He tried to fend off the mountain lion with rocks, but it didn’t help. Eventually, the bear stepped in to help and fought the lion off. Then she calmly returned to her cubs helping Robert survive as well.

In 2008, Ronnie Dabal’s fishing boat was destroyed by the waves and he was thrown in the water. He was holding on a Styrofoam raft but couldn’t battle against the big waves so he gave up. At that moment a group of around 30 dolphins and two whales came and pulled his raft to the beach of Barangay. 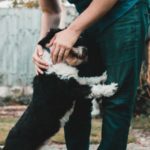 Some People Love Their Pets More Than They Love Other Humans