A Rare Polka-Dotted Baby Zebra Was Spotted In Kenya

On his search for rhinos, Frank Liu, an experienced photographer, spotted a polka-dotted baby zebra in the Masai Mara National Reserve in Kenya. Tira, as the baby zebra was named, has pseudomelanism, an uncommon skin pigment condition.

Tira was the surname of the guide who first spotted the baby zebra. There was a rule in the National Reserve – whoever finds an animal has to name it.

At first, the photographer thought that the baby zebra had been captured and pained for migration purposes.

Last night a Maasai guide discovered an one of a kind genetically mutated baby zebra in Maasai Mara and named it after his surname – Tira. This morning we were one of the first ones to visit Tira! Few years ago there was a similar case, however that zebra still maintained the stripes and brush-like tail. Tira, however, has patterns that appear as polka dots! ◼️⚪️ I hope the experts will look into this case and share some interesting discoveries soon! @natgeo @natgeowild @natgeoyourshot

However, pseudomelanism, the generic condition that the baby zebra has, leads to abnormalities in the stripe patterns of the zebra.

Ren Larison, a biologist in Los Angeles, explained that the zebras have dark skin and their stripes come from melanocytes, special skin cells that transfer melanin to their hairs.

As the news of the unusual baby zebra spread across social media, tourists traveled to Masai Mara National Reserve to see it.

However, according to a scientists` debate, it is considered that Tira can be susceptible to fly bites without its standard stripe pattern. The black-and-white stripe pattern of the zebras is thought to serve as fly repellant because it disorients fly and makes their landing difficult. If this is the case, Tira will not be able to deter flies, which can cause diseases like equine influenza.

The future of Tire is unpredictable. Research has indicated that it is easier to target an individual in a group if it differs from the others. 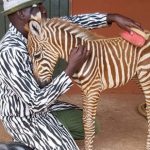 The Orphaned Baby Zebra Was Rescued By These Conservation Workers 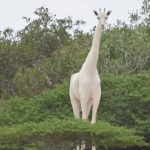