Fifteen Things To Consider As Your Little Brother Grows Older

Even though you might have been fighting all the time, a baby brother might be the best thing that can happen to you in life. Most sisters will agree that at a young age they’ve bossed their brothers and forced them into playing games that only the sisters enjoyed like playing with dolls, tea parties, dressing up and similar games.

But as you and your brother grow up you begin to realize some things that he is, in fact, your closest friend. We’re pointing out some of the things you realize as you grow up:

Even though you’re older, he will get bigger than you in time

When you were young, you were able to win in a wresting game or have even games of tag but as he outgrows you, you realize that the fights are not fair anymore and your chances for winning a fight are not so great now.

Often, girls get a bad reputation for their teen phase but boys can be as sassy as the average teen girl. But as time goes by, you just forget about it as you realize that he is your precious little brother deep in his soul after all.

You might think that your baby brother will always admire you with pride, and sometimes it might get annoying when he starts copying you, but you need to think about those times as blessings because he will not always be like that.

There will be times when he will start contradicting your ideas and you will realize that most of the time he makes a really good point. So there will be a time when you can learn a great deal just by listening to him.

According to you, no girl that he will ever bring home will live up to your expectations because you know how amazing he is. Sometimes you can get annoying or controlling, but, in the end, he’s your precious brother, there’s no arguing about that.

No matter how old he is, if someone messes with your little brother, they will have to deal with you

Even though I’m not a big fighter, when I see my baby brother being messed with, my ego grows and it seems to me that I can fight anyone. Even though everyone is bigger than me, there’s a feeling I get that I can protect him from whatever comes in the way and from a little girl, I become the fiercest thing that ever existed.

Know that he will protect you too

If he was shy and quiet when he was a kid, he will not be scared to protect you now. Even when he knows you’re wrong, he will defend you and know that he is there for you like you care for him. When you just need someone to tell your problems to, or you’ve had a bad argument with some of your friends, or you’ve broken up, or you want to go watch a movie, know that he will be there for you.

A lot of people will mistakenly think that you’re a couple and will compliment that you two are very cute together, or you look perfect for each other. These are all sweet moments that you can do anything about but smile.

You credit all his success in life to you

Remember that time you forced your brother to play games such as “school” or you tried to be his teacher about everything and anything? Well, those things turned out useful because now when he’s older he knows a lot of stuff.

You go a little crazy whenever you think about how old he is, and you consider him too young for things when you did when you were as old as him

He will always be little in your mind. The thought of him driving at just 16 is too scary for you, but you did the same thing at that age. It is hard to realize how time flies by and that your brother is aging as fast as you.

Know that he always thinks what’s best for you so when he says that a guy you’re dating is not good for you’ or he thinks you’re making a wrong decision it’s good to listen to what he says because he’s probably right.

He will always be on your mind

You know that it’s annoying to care about him all the time, but the sheer thought that he might get hurt is just devastating for you. You are worried every time he decides to take a risk, but you’re also aware that you believe in him because he is intelligent and you will be there for him if something goes wrong.

He has no bigger fan than you

You two know how to keep your secrets and you will never betray one another. He’s the one you go to when you need advice about anything because he knows everything about you and you know everything about him.

He will forever be your little brother to you

It doesn’t matter our age, I still tell him “I love you” every day and I will always protect him and watch over him. He is my best friend for life, he’s the one that calms me down when times are tough, and he’s the one I am happy with when times are bright. I feel thankful for having a brother by my side. 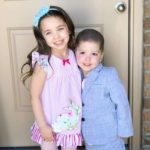