If You Have Friends Like These, You’re Probably Better Off Without Them

Friendships aren’t built overnight. Most of us have friends that we might’ve met at work, college or some are even from our childhoods. Friendships give people a sense of security and inclusiveness, but often people don’t think more deeply about how their friends affect their life.

When two people first meet, they analyze each other’s characters trying to see if they could become friends. But once they become friends and get closer, everyone seems to give up on the analysis.

But that’s not a good thing to do. If being part of a certain friendship or even a family relationship makes you feel down or unmotivated but you just keep maintaining it because you’ve been friends for a long time – that can be quite bad for your mental wellbeing.

Time changes people. That means that you should re-evaluate the productiveness of your relationships for both parties. You shouldn’t waste your precious time on people that drain your energy and bring you down.

These are some types of people that can harm your wellbeing:

1. The ones that complain

If you have a friend that constantly complains about stuff and always sees the negative side of everything that can easily bring everyone down. If something bad happened to them, they will tell everyone about it and they enjoy telling people how bad they feel, but they don’t do anything to fix it. People that constantly complain are so hard to have fun with because they are almost impossible to please.

2. The ones that criticize

When you share your ideas, plans, or goals about your life with naysayers, they will always give you arguments about why they would never work and you shouldn’t have even thought about them in the first place. The criticism they give is not productive at all. They’ll just hurt you and make you feel belittled. It is a terrible feeling when you have dreams to be excited about and someone crushing them right in front of your eyes.

These people do that because they’re afraid of failure so they stay in their comfort zone all the time. They don’t take risks because of this fear and they project it to those close to them as well. If there’s even the slightest chance for failure they think they’ll fail.

3. The ones that doubt

Doubtful people aren’t as open as the naysayers, and that possibly makes them a lot worse. They won’t crush your ideas and dreams directly. They might seem supportive in the beginning, but as soon as you make the tiniest mistake, they will make sure to point it out and make it seem bigger than it is. They doubt themselves, so they automatically doubt other people too, and if they can’t do something, they don’t want anyone else to be able to do it.

4. The ones that brag

The braggers are the opposite of the naysayers. If they did something good, they need validation for it and they will make sure everyone knows about it. Deep inside they’re very insecure and they have low self-esteem – that’s why they need a confidence boost from their friends. If you share your success with them, they won’t be happy about you, instead, they will probably try to one-up you.

One even worse version of the bragger is a humblebrag. They will purposely self-depreciate for people to compliment them and give them validation. This type of behavior is not healthy for nobody in the group.

5. The ones that bailout

It’s pretty normal for things to turn out unexpected and people to bail out on plans, but if that happens constantly then it’s a problem. The flakes always forget important dates and times and even after being reminded, they don’t do the thing and say bad excuses about it, sometimes they won’t even offer an excuse. That is not the only bad habit they have though, they also seem disconnected from their friends because they spend most of their time scrolling on their phones, interrupting them, and not caring about them even if they say they do.

Some people just can’t manage their time properly or overestimate their abilities and can’t finish everything they planned to. But these are different because they learn from their mistakes and try to improve themselves.

Every person has flaws and might bail out on something from time to time, but if they act manipulatively or aggressively about it, then you don’t need flakes like that in your life.

The real meaning of friendship 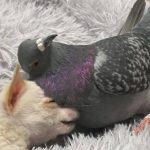 The Adorable Story About Lundy, A Chihuahua That Cannot Walk, And His Best Friend Herman, A Pigeon That Cannot Fly

« Watch The Magnificent Aurora Borealis From The Warmth Of This Glass Igloo
Gen, A 5-Year Old Corgi From Japan Whose Facial Expressions Can Instantly Make Your Day »