Everybody wants to go back to the times when they were a kid. But we should never even let the kid in us grow up. A lot of us remember the Little Tikes Cozy Coupe toy cars from our childhood. If the thought of these cars brings you nice memories, then there is some good news about you: there is a fully functional remake of the same Cozy Coupe that you can drive.

The Little Tikes Cozy Coupe first appeared in 1979 and has been redesigned a couple of times, the first time being in 1999 when it got the yellow roof poles.

On its 30th birthday in 2009, the Cozy Coupe toy car got some other additions like cup holders and a cartoonish smile in the front part.
Since its launch, the Cozy Coupe has been very popular, and it even got the title of the best-selling car in the USA a couple of times. Those that drove the famous red and yellow automobile around their houses are still very nostalgic about it. 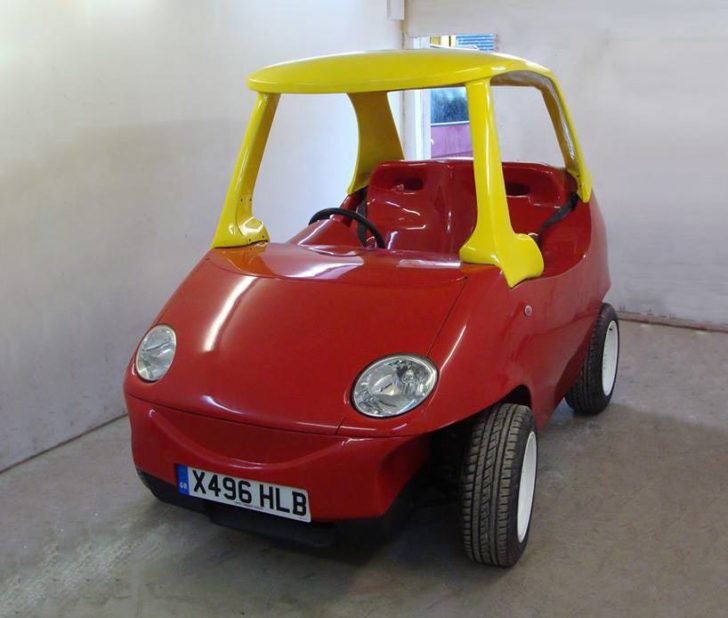 Luckily, John and Geoff Bitmead, two brothers from the UK, also owners of Attitude Autos had a brilliant idea when they were working on a Daewoo Matiz car in 2013.

The front part of the car already resembles the Little Tikes toy car, so they just did small modifications to make it look the same as the famous Cozy Coupe. It has the iconic yellow and red colors, and it’s a fully functional and legal car that you can drive. It reaches speeds to around 70mph. It also comes with all the regular stuff for automobiles such as airbags, mirrors, lights, and a gas tank. But like the original, it doesn’t have any windows or a windshield, so it’s only the best for driving when the weather is good.

John and Geoff’s first idea was to just drive around with the car so that as many people will get to see it, but it got so popular on social media that it won a Guinness World Records certificate. Soon after, they put the car for sale on eBay with a price of 21,500 pounds (roughly 33,000 US dollars).

The brothers said that they had driven around five thousand miles with it all around the UK, and while it’s not the fastest car in the world, it will surely attract a lot of attention from people many of whom would like to take photos and selfies with it. They were happy with all the reactions that they got from the people that saw the car and recognized it immediately.

« A Cat With A Two-Colored Face Got Kittens In Both His Colors
People Aren’t Born Strong, They Become Strong By Surviving Through All The Changes In Life »